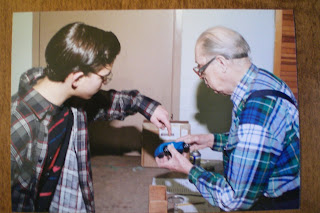 Every winter I think about the fun we had with our AWANA Grand Prix race and how dad would help kids with their cars and help me by setting up the track he made and weighing the cars before the race. It's similar to the races the Boy Scouts and Boys Brigade had. He would bring along his little tool box with oil for anyone who forgot to oil their wheels and bought a special scale just for the race. (The scale was stolen when I was having my estate sale.)

My dad loved helping with it and really, he was the one who made it so good. First off, he spent hours in the garage and the basement building a track for us to use. (I donated it to a campground after we stopped our AWANA program.) He followed the instructions AWANA made available to those who wanted to build their own track. He also made the light gadget at the finish line so t 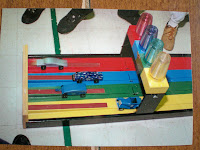 hat it was easy to see which car came in first. When the first car hit the finish line, the light above that track would go on and all the rest would be blocked. This greatly helped because the first year, we had to have flaggers who tried to judge which car was first. There were a lot of ties called because you just couldn't tell and we wanted to be fair about it. Even with the lights, if it was a tie, then two would go on. 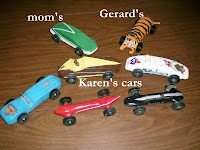 Even after the track was built, he would spend hours testing it to make sure all the lanes were the same and all the lights worked properly. He would use the cars he had made for my mom and me to have "trial runs," switching them around on different tracks to make sure the same car won no matter which track it was on. If it didn't he would fix it. (I don't know how he did that part.) He had a great sense of fairness and was willing to help anyone. (I was thrilled to find these cars in my dad's basement when I was clearing out the house.)

Providing Assistance In Making The Race Cars
Again, Harry showed his sense of fair play realizing all kids didn't have parents who knew how do make a car or who had the right tools to use. Some kids didn't even have anyone who wanted to help them so he included a little note in each kit offering his assistance with his phone number and address. Parents would arrange a time to have the kid bring the car over for him to cut out the way they wanted it. The rules said the car had to be designed by the clubber, but they could have adult help with cutting it out and putting it together. He would ask the kid if he/she wanted any weights in it and would put them in too according to how heavy the clubber wanted it to be. Harry never did anything halfway. It may take him what seemed like forever to do a job, but when it was done, it was right and it was great! He took pride in his work and often would spend days and days just thinking about how best to do something before he would start. Once the track was finished, he went a step further and made a "Race Board" to hang the names of the ones in each race so people could see who will be racing against whom. Then as I sold the car kits and got a list of the numbers, Harry spent hours printing the name and car number on the pieces of cardboard to hang on the race board. It was very helpful in keeping everyone aware of how far along we were and whose turn it was next. We let the clubbers each come up and set their car on the track themselves. It was just a great way so everyone could see who was racing and who belonged to which car.

"Socializing" was not in my dad's vocabulary. He liked working around the house, in the garage or planning his next project. That's why his involvement in the AWANA Grand Prix was so amazing to both my mom and me. He thrived in helping me run this event and seeing all the cars the clubbers brought in eager to race. After the cars were displayed on the table, he took pictures of ALL of them. Pictured here are just a few. Dad was in his late 70s and early 80s during this time. Such an amazing, wonderful human being!

AWANA CLUBS (AWANA stands for Approved Workmen Are Not Ashamed which comes from II Timothy 2:15)

If your Bible believing church is looking for an outreach ministry to families, I highly recommend AWANA. You can visit their web site for more information about the International ministry whose goal is to reach boys and girls with the gospel of Christ and train them to serve Him or find a club in your area at http://www.awana.org/.
Posted by Karen, author of "My Funny Dad, Harry" at 5:00 AM

How fun and yes your dad was amazing. I get that very clearly. I'd not heard of AWANA before, but what a great group.

Again thanks for sharing more about your father.

Your dad was a wonderful person! Friends of mine are in charge of the AWANA's group at their church. They stay busy and do it for the kids. It means a lot to most of the kids.

Wow what a fun, wonderful and amazing thing!!

Looks so much fun! Your dad was an amazing person. I'm sure those kids had a lot of fun with him.

Great blogyou have going here. I work in the Awana program at my church and we are about ready for the Awana Grand Prix. Maybe my church should challenge your church to a race????
Hey, if you have a minute or two of your life that you want to waste, drop by my blog for a lil visit and do say hello :)

I so do remember reading this in your book. Your dad is truly a very generous man. I'm sure he affected many people throughout his life. It was a good thing that you were just as generous for allowing him to help others and not just you. Others in your situation would have felt cheated out of their time with their dad.

Sandee--AWANA is a wonderful ministry for kids. I wish they had that when I was a kid. I think I would have liked it very much. I miss it because we don't have it at the church I currently attend.

Karen--It does take a big commitment from the leaders to run a good club, but it's a lot of fun and the kids memorize a lot of scripture through it as well.

Stephanie--The kids and their parents really enjoyed the Grand Prix racing. It was a lot of fun! We had 1st, 2nd and 3rd place trophies for both speed and design. It was very hard to judge the cars for design.

Modern Mom--My dad always liked kids as long as they behaved. Even when he was 88, he still liked it when the neighbor kids came over to chat or pet his outdoor cats.

Midlife--I am not currently involved in an AWANA club. The church where I used to be commander stopped the program and Gerard & I changed churches shortly after that and the one we changed to didn't have AWANA. I do support a club in the Philippines and one in Ecuador though monthly. What group do you work with in your church?

Tashabud--Oops, I missed you. Yes, my dad was very generous and I'd like to think I am as well. I never resented anything he did for others at all. I was proud of him for helping so many people.

Too fun! Harry is the guy, every church needs. Ours has one too. His name is Gordie. He helps all the kids who's Dads have two opposable thumbs and can't put a pinecar together. God Bless!

I never realized that is what AWANA stood for!

You are blessed to have had a wonderful Dad. My own Dad was very much like your Dad, I think! He was always helping out at his church and built a conference room table that amazed everyone.

Oh man, we spent years competing with those cars in Boy Scouts. Joe and Colin would plan for weeks and spend endless hours fixing it "just so"! We did have some winners--but I think they just loved the competition.