Too Many Pesky Pills 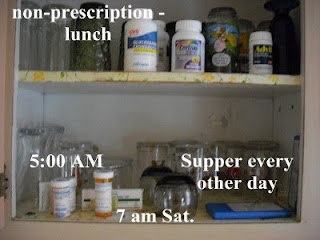 Keeping track of one’s pills can be a bit confusing.  Those plastic weekly pill containers worked good to help my dad remember to take his pills every day.  He had three separate holders for his morning, lunch time and evening pills that he clearly marked.  He would fill up the containers On Sunday and that way he would know if he took his daily pills or not.   The only problem was that if he fell asleep, sometimes lunch time wouldn’t be until 3:00 or his evening pills would be really late which he was supposed to take at the same time every day.  It’s sad that as we get older we generally have more pills to keep track of which can become a bit confusing and sometimes overwhelming.

I used to think he was making a big problem out of nothing but now I have six pills to take and realize it is an added responsibility.  One is only on Saturday morning and one is only every other day (I use the calendar to help me remember which days to take them).  I just pull the bottles out of the cupboard when it is time to take them and after I take the pills, put them back right away.  I do not use the weekly pill holder because sometimes I take them at home and sometimes I take some at work.  Fortunately, my memory is good enough that I take them right on time each day.

Last week though, I had a day off so was out of my usual routine and was pretty stressed out.  I remembered I had to take my vitamin pills that I normally take at work, but instead of reaching for them on my second shelf, I grabbed the morning pills I take from the first shelf out of habit.  Oops!  I had the 5 a.m. swallowed and the next one in my mouth when it dawned on me these were not the right ones!  I was able to spit the second one out, dry it off and put it back.  I felt very stupid but from now on, I will take them out with the others when I am home so that doesn’t happen again.

I told the Pharmacist I accidentally took my early morning pill twice and asked if I should skip it the next day or still take it.  She said “Why would you take it twice?  How did you do that?”  I answered, because I’m stupid and explained I was off my routine.  She told me it wouldn’t hurt and that I should still take one the next day as usual. It sort of scares me a little that I did such a stupid thing when I’m not even a senior citizen yet!

Everyone makes mistakes but I try not to make the same mistake twice.  I think this will work.  Do you have pills to keep track of yet?  If not, you are lucky!  If so, what system do you use?


I am donating 50 cents per comment this month to Heifer International.
Posted by Karen and Gerard at 7:54 PM 3 comments