When I was going through grieving for my dad, cleaning out his house to get it ready to sell and basically putting in long hours every day while trying to maintain time with my husband, a few people helped me out a lot.

However, some of the neighbors came around offering their “help” only to get stuff, which I was mostly okay with if they offered to buy it; but I wasn’t okay with them stealing from me. How can people be so mean? Here I was still grieving and overwhelmed with so much to do, running myself ragged working at my dad’s to get the house ready for sale and still trying to get home to spend some time with Gerard. It was a very hectic and emotional time for me. That’s when I really decided that the sooner I sell, the better.

I had a lot of knick knacks and some other small things set out on the dining room table that one of the neighbors from up the street came to look at. He offered to buy a lot of the knick knacks that he planned on taking to the flea market to resell, but after he left, I notice the small scale that we used at the AWANA Grand Prix to weigh in the cars was gone. It had been on the dining room table with the knick knacks and was something I had wanted to keep. I should have brought it home with me sooner, but didn’t. I never saw it after that day so assume he must have taken it.

Ricky cleaned out the 3-car garage for me which I really appreciated. I had no idea what to do with all that junk that was in there but it was such a big job that he asked another guy to help him. I was paying Ricky for his help, but Ricky told his helper from up the street that he could borrow my garden weasel. It was an great tool for getting out whole patches of weeds and I had planned to use it and keep it. Too bad I never saw it again. The guy never returned it and Ricky never got it back for me.

Why didn’t I report it to the police? Truth is, I didn’t need any more hassles and just didn’t think it was worth my time. I’m sure the Cleveland police had bigger crimes to solve and probably wouldn’t have been able to get my things back anyway. There’s no way I could prove they were mine. Some people just see a weak vulnerable female as an easy target and don’t hesitate to take advantage even though stealing is wrong, wrong, wrong! Thou shalt not steal.

Did anyone ever steal from you? What did you do about it?

Photo Tag Challenge--Number 8 It Is 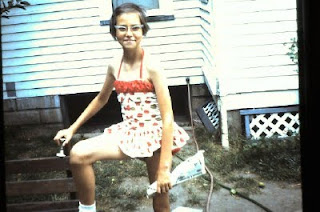 I've been tagged by Home to the World to do this photo tag challenge. Here are the rules:

Okay, this is a picture of me from 1964 in our backyard.  While others were in the pool, I acted as lifeguard.  I rolled up a newspaper for my horn to announce rest times--yes I did.  You see, I didn't like the water, or going barefoot.  Look close and you will see I am wearing socks with my swimsuit!  My dad got us a 3-ft. pool and we had a lot of fun with it.  Although I didn't like to swim or even go in it, I did enjoy playing with boats and army men in the water from outside the pool.  Go ahead, laugh.

Now, doesn't this sound like fun?  Feel free to copy the rules and participate in this photo challenge if you wish.  Of course, a link back here would be appreciated.  Oh, and if you laughed at me when you read this or looked at my picture, consider yourself tagged and do this challenge!

Which Cat Did This?

I thought it might be a fun series to give you some insight into my dad's cats by doing some little "Who Am I" posts. I haven't posted much about his cats on here but they were very important to him and a huge part of his life after my mom died. So, here's some things about my favorite one of his cats:

Clawed up the carpet by the hallway door.

Loved being brushed. All I had to do was pick up the brush and he would jump up on the table and lay down for as long as I wanted to brush him.

Licked so much, he had bald spots--the Revolution fixed the problem.

When he went to the vet, his skin was so thick the vet was afraid his needle would break.

Liked laying on the brand new air conditioner box that Harry never opened in the middle of the upstairs dining room.

Fought with Sylvester whenever he left the bedroom room.

Afraid of strangers and would hide from them the best he could.

Never scratched people even though he clawed the scratching post to bits.

Never was neutered, did some spraying in the house. 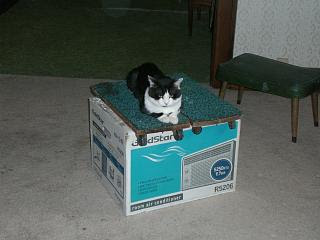 This was Sweet Thing, the black and white cat who outlived Harry.

You Can Try . . . But Some Things Just Won't Happen 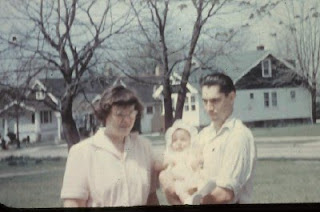 This picture was taken in 1954 of my parents holding me. My parents named me Karen Anne (with an "e" because Ann was so common, they wanted my name to be a bit different). Anyhow, I was called Karen Anne for the first few years of my life. I think my mom wanted me to be called Karen Anne because at the time, the name Karen was pretty popular. The bottom line though is that I didn't like it. I always just went by Karen.

Funny thing about names--the person they belong to really has the final say in the matter. My dad was named Harrington and the only people who actually called him that was his mother and her sisters. Everyone else who knew him called him "Harry."

Do you go by the name your parents planned for you?