I remember my dad would bang the table and yell "I'm so stupid!" when he'd be clutsy and drop things or if he'd accidentally knock over his milk. This kind of thing happened more as he got older, but I guess he got to the point where is wasn't so unusual anymore so he didn't bang the table as much as he did when he was younger. 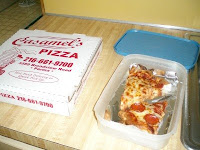 I find myself yelling the same thing, plus "How can I be so stupid???" when I put my pizza slices in my Tupperware container for lunch to eat at work the next day and instead of putting it in the refrigerator, I put it in the cupboard! Can you believe it? Sounds like the beginning of Alzheimer's, doesn't it? I was thinking ahead about what I was going to do instead of thinking about what I was doing. I not only did this once, but twice!!

I am not alone though. My husband, Gerard, said exactly the same thing when he threw away the L.L. Bean catalog with a $10 coupon in it that could have been used on our next order which he forgot was in there!
UPDATE 2/14/09: I should mention (due to Mountain Woman's comment) that I did mention this when I ordered something and they were very nice and still took the $10 off my order. They said they have these coupons on file. I love L.L. Bean!

If you are interested in finding out what living with someone with Alzheimer's is like or if you are in that situation and could use some encouragement, help, advice or assistance, "Measure of the Heart" by Ellen Geist is a book you should read.

I haven't said this to myself yet but my husband will say it when he does something that he thinks is "stupid". I just cringe because I don't like anyone being called stupid - even if he says it to himself about himself! Having said that, I'm sure they'll be a day when I will begin to say it to myself.

By the way, I love your new blog look by Ana! She did a great job!

I read the theme of your Banner and it immediately reminded my about my Grandpa.

He was partially blind by then and if any item was moved by as much as 6 inches away, he would be in dire straits for the item he needed badly.

Yeah, sometimes I used to get scolded for being "stupid" when all I wanted to do is to help keep his things in order.

You're not stupid; neither was I. Sometimes, we fail to understand that MESS IS BEST. hahahaha

Hi Karen,
I say that sometimes, but mostly grumbling under my breat and not fist-pounding or saying it aloud.

I found out that when I do something stupid, it was because my mind was pre-occupied with many other thoughts. I wasn't paying attention to the task at hand.

You're not alone in this, I assure you.

Oh, it's not just you. Trust me. If I went back and looked at all the entries in my blog since I started, half of them would go in the "I'm stupid" category. I think everyone has these moments. I agree with Tashabud. I think we're so preoccupied with other things. We're so busy and that's what leads to putting food in the pantry instead of the fridge. Yep. Been there, done that.

I agree with tashabud and Kathy. I think people just get distracted very easily and when you are not paying attention, you do things by habit. You probably often put things into the cabinet so jut automatically did it because you were thinking of other things.

By the way, I love you new design. It is so reader friendly! I agree with the desk sentiment. I hate when anyone touches my stuff.

Beaded Tail--I don't call others stupid but usually just myself. Ana did a great job all right, I especially love the header and the navigation bar so my awards can be on a separate page.

Windmill--My dad used to have piles all over his dining room table. One was for magazines that he wanted to index before saving them on his basement shelves.

Tashabud & Kathy--Good to know I'm not the only one. You are right though, sometimes I just have a lot on my mind and don't focus on what I'm doing.

Anne--The cupboard is where I keep that tupperware container so I guess I was just on "auto-pilot" and out of habit as you say, it went into the cupboard.

Bill has a habit of saying he's stupid and doing stupid things and I always tell him to stop saying that because he's not stupid, it ticks me off.

I normally say," Now why in the world did I do that?" I do not use the term stupid or try not to. We all get confused and the older we get we are preoccupied with any number of things.

No it's not just you. All of us say this from time to time. Getting old isn't for sissies. It's a tough transition. Your father was just venting his frustrations.

I love your new header by the way.

I always forget something...when I wanted to do something and started to walk, I just forgot what I wanted to do...!
Is it only because I'm old enough? ;-P

Personally, I try not to say stupid. My step-dad was a "not-so-nice-person", and he spent a lot of time letting me know how dumb I was. So, it's a personal thing. I just try to laugh when I do things like that and not make a big deal out of it for myself or others. When it boils down to it, it really is funny, right?

BTW - I finally posted your Lemonade Award! Thanks a bunch!

I don't say that to myself, probably because my father said it to me so often when I was a kid. I do put things in the wrong places all the time however.

I do that a lot too. I find I "misplace" things all the time too.
BTW...I love you new look!

Jude--I like that, I'll have to try to start saying "Now why in the world did I do that?" instead. I hate it when Gerard calls himself stupid or tells me I married such a dumb husband which he says sometimes when he's mad at himself for doing something foolish. I think both of us tend to be perfectionists so over react sometimes.

Sandee--my dad was always like this though, not just when he got older. I love my header too--Ana at Chica & Pumuckl did my layout for me and came up with that great header!

Nyanko--yes, I do that sometimes too, but then I remember pretty quick what I was going to do. It is a bit scary though.

Tina & Jen--I was very fortunate and blessed with great parents. I can't remember them ever calling me stupid. I am usually very organized (like my dad) and always return things to their proper place. Although, his "proper place" was in one of his piles on a table or a chair.

C--When my dad got to be in his 80s, he'd misplace things and forget where he put them, but so far, I don't usually do that.

Look like we cannot really concentrate on what we do as we grow older. The things that we are once good at, sometimes take us hours to accomplish. A sign of old age? Maybe. But this humbling experience should draws us nearer to God and say: Thank God for the little that I can still do.

Karen,
I do stuff like that all the time, especially with my keys. I had to put up a special hook for them so I wouldn't keep losing them.

As to the LL Bean coupon, if you call customer service and explain the situation, they'll give you another one.

Karen, I somewtimes call myself some funnt names that I will not repeat here.