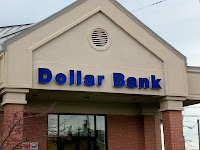 It's so easy to make a mistake in my checkbook. I do online banking now and both our checks are automatically deposited so I do not go to the bank every week like I used to. When I got a nice cash Christmas/Birthday gift from one of my bosses, I went to the bank to deposit it in my checking.

First off, I gave the teller my deposit slip but forgot to give her my money . . . oops. She was very nice and simply asked if I had the money. I quickly pulled it out of my coat pocket and gave it to her, thanking her for being so nice and not saying, "Give me the money you dumb woman." Then she mentioned that I had two overdrafts on my account. I was shocked! She was very nice, again not calling me stupid or anything and told me which checks were overdrawn, both I had written. She said she'd waive the fees which were $35 each for a total of $70!

Good thing I had some cash to deposit so I had to go to the bank. Who knows how long before I would have found out about this otherwise.

I couldn't get back to the office fast enough to reconcile my checkbook. It was longer than I thought that I had done this (time goes so fast) and I found not one, but two numbers that I simply copied down wrong. One was the balance when I carried it forward to the next page which was a $100 error and the other was an incorrect amount for my phone bill which resulted in a $32 error. 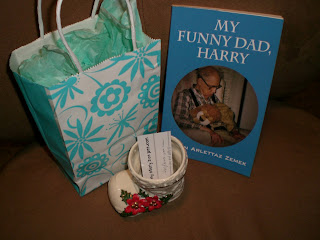 I am so grateful to her for waiving the fees and today will be taking her a little gift to show my appreciation-an autographed book of "My Funny Dad, Harry" and a decorative Christmas boot with some chocolate covered pretzels and my PNN card letting her know where she can read about what a nice teller she is.

Although I made stupid mistakes, which happen, because of them, I received a blessing and in turn can be a blessing to someone else. Little acts of kindness can really make someone's day. How about this for a New Year's Resolution: Be kind to someone each day and try not to do so many stupid things!

Yes, every one should be nice to one another but it is impossible. :(

I try to be nice but would get stares or sneers or sometimes teased.

When someone makes my day, it's such a wonderful feeling!

That's an excellent resolution. I make it mine too.

Cool blog. I think it's so sweet that you wrote a book about your dad.

That was nice of the teller to waive the fees. I didn't think banks would do that. Who knew? That was nice to give her that gift. She must have been surprised.

P.S. Thank you for continuing to visit me while I'm without my computer. I really appreciate all your visits. It's going to take a little longer then I thought to get one. It won't be delivered until the end of this month. Hope you had a Happy Holiday Season!

i made mistakes like that too, and like you i'm also thankful that the account officer, bob, was very nice to me. and because i've been banking with them for years, he waived the fee.

yes, you were very lucky the teller was so helpful. We all make mistakes, and it can be quite costly too.
And I agree that your book makes a great gift. I won a contest at Red Pine Mountain blog, and just received your book as my reward. We've been having some computer problems so I haven't been able to sit down with the book, but I can't wait to start reading it.

All--
Yes, it really was nice of her to waive the fee. I have a large amount in savings though and have banked there ever since I first had a savings account opened as a kid so that's a very loyal customer. I just was so grateful to her that I felt I should do something in return.

EastCoastLife--
What a shame when people don't appreciate your "niceness."

Lyla--
Thank you. It was really fun writing about my dad. It keeps him alive for me in a way.

Sue--
What a headache with your computer. I know how much I missed mine when it was in the shop for just about a week. Not good!

Liza--
Glad to know others make silly mistakes too and I'm not alone. Thanks for sharing your experience with me.

Sandee,
I just came from adding to your "story game" at http://comedyplus.blogspot.com/2009/01/story-game.html on your blog. This is harder than writing non-fiction! I'm not used to having to make things up, but I thought I'd give it a try.

WOW!! That was super nice of her to waive the fees!

I find we make more mistakes because of what I call "the stupid debit card". My husband loves to use it but doesn't want to record the withdrawals. About once a month he hands me a PILE of receipts - to which I say YUCK! Now I'm working hard to make sure he always has some cash so that he won't use that stinkin' card so much! :-D

Sweet. I love the new pictures of cats on the top of the page!

Lynne-
I have one of those debit cards too but have only used a about 3 times. I'm afraid I'll forget to write it down. I'm glad my husband doesn't use it either, only once but at least he tells me.

Jennifer--
Thanks. Ana at Chica & Pumuckl did that for me!

PurpleGreenPops--
I believe this is your first ever comment on my blog--thanks! Yes, can't go wrong following the Golden Rule.

Hi Karen,
That was nice of the teller and nice of you to give her the presents.
Just letting you know I enjoyed your book so much and have it on my site today.
Thanks to Mountain Woman and to You!
Have a great day.
Pam

I am glad they waived the fees. That is a lot of money and it would have been awful to have to waste it in fees. How thoughtful that you brought her a gift.

Whew! That's a lot of money. It's nice that she waived the fees.

Oh that's so wonderful of you to give her a present. But she is too nice to you and deserve it. hehehe. I also love to write my own book but I really can't decide what to write yet or if I can finish it. Was it hard when you start?

By the way, thanks for the comments on my blog. I'll try to follow your advice about the alarm clock. I think that's cool and will really help me track my time especially when I'm doing my blog hopping. hehehe. Thanks again and hope to see you again. Take care!

That was very nice of her to waive the fees and a wonderful gesture on your paret to give her those gifts! I'm sure you made her day!

You are so right about the little acts of kindness that go a long way towards making someone happy!

I love and completely agree with the idea that little acts of kindness go far!!

Make Ginger Bread Cookies. You can make them in advance , keep them in the fridge. They are easy to decorate. Go to any cake/candy supply making store. All kind of ideas. Put each in a clear cello bag tie off with raffia/card. Decorate cookie relating to that person . They are a hit.

I would search online or go to a library. Then have really cool things on google.com u can search for. Like crafts, recipes, and activities. check it out.