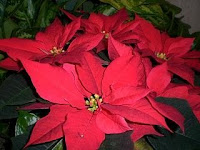 Every year I debate if I'm going to send Christmas cards and then end up doing it. I know it's nice to hear from people at Christmas time, especially ones we don't see throughout the year, but I know our cards just get tossed into a basket. Then next year we throw them away to make room for the new ones. I update my "card" list throughout the year and usually buy cards for next year when they go on sale after Christmas.

When I used to ask my dad if he was going to send Christmas cards this year, he always would. He'd always be sure to buy a religious one to send. They are getting harder and harder to find. Most say "Happy Holidays" or "Holiday Season." Many have very cute pictures of animals or beautiful scenery, but those aren't really projecting the true meaning of Christmas. Therefore, I too always buy the religious ones. I figure if the Christians don't, who will.

I used to call my dad a "fuss budget" because he always made extra unnecessary work for himself in my opinion. He'd fuss with stupid things. His Christmas card "ritual" is one example. He kept track on paper of who he got cards from and would make sure to send them one back if they weren't on his list. But just a check mark wasn't good enough. He put the date he received a card. Then he'd also have a list of people that he sent cards to and keep going over and over his lists.

Harry sent out cards every year in December. The last six years or so of his life, I printed out mailing labels for him so he didn't have to write as much. It was a bit difficult for him to write because of arthritis in his fingers. The last Christmas before he died (2006), he got behind schedule and didn't get his cards out on time because of the medication he had been taking that made him so drowsy that he'd fall asleep for long periods through the day and wouldn't get anything done. I felt bad for him and offered to do them for him, but he wouldn't hear of it. He said, "Oh no, I can do it." I suggested that it wasn't mandatory and that maybe he just shouldn't bother with it this year, but he said, "Oh, I want to send them out so people know I'm still alive. Otherwise, they may wonder."

So, his last Christmas, came and went and he didn't get his cards done in time but sent them out after Christmas so people would know he was still alive. He said he wanted to put a note inside explaining to the people why his cards were sent so late so I offered to type up little notes for him to just insert inside. After I explained he could tell me what he wanted it to say and I would type it up, and print them from the computer, he finally understood and started dictating away. He died the following February, two days after Valentine's Day.
Posted by Karen, author of "My Funny Dad, Harry" at 8:58 PM

I debate too whether or not to send cards but I always do - especially after receiving the first one because I don't want to have the guilt of not returning them. I don't have the system that your dad had. As for the last cards he sent out, I'm sure people really appreciated the effort he put into them even if they arrived late. He sounds like he was such a wonderful man.

Your dad sounds like a good man. Greeting cards are always a part of my list to send to friends on Christmas. This time of the year, I found this wonderful site, http://www.petcentric.com/crittercarols/?DCMP=RAC-PETC-DogTm-Carol08&HQS=Blog. It allows you to create animated e-cards featuring a chorus of singing and dancing pets that bark or meow your favorite holiday songs. What's more fun is that you can even use your friends' or your own pet's photos. I sent one to my friends, and boy, it was a sure hit!

Hi Karen,
This post made me tear up. I could picture the scene vividly. Your Dad was a decent, consciencious man.

I also make a list of people that I've sent Christmas cards to every year. But I don't put the dates when I sent them or when I receive one.

My husband or I usually write a letter that chronicles our family happenings for the year in the computer and then print however many cards I have written out. I then put one in each card.

Beaded Tail: I always debate about this too but end up sending them.

JLouis: Oooh, thanks so much for the website. I MUST check this out and will share it in my Friday "Things I Learned This Week" post on my other blog at www.zemeks.blogspot.com. I may even have to add it to an earlier post as well so people can check it out before Christmas.

Tashabud: We started doing the letter thing too. I don't really bother keeping track of who I get or don't get cards from. I just update my Christmas list of who I send to every year. If you like this post, you would like my book. There's even a bit more to this story that I didn't include here related to Sylvester and Sweet Thing, two of my dad's cats.

Hee, hee. Actually, I've put in my Christmas list. I'm hoping that someone in my family had gotten it for me.

I think your dad's system for cards sounds very efficient. I have thought about putting something like that together, but I know I would never follow through with it.

We send out photo newsletters. It is a photo collage from the year, allowing people to see what we have done.

I send a bunch of Christmas cards last week and they like it. I just make my own and print it. merry Christmas Karen. Anyway, the result of the contest Mommyko's Christmas giveaway is in and the book that you promise the winner said that you will just mail that to me since she was in the Philippines and ask permission she will just use the book to sponsor also. If it is ok. Take care.

Wishing you and yours JOY, LOVE & PEACE this holiday season. Merry Chrismas!

thanks for leaving a comment on my blog. just keep on sending greeting cards, hahaha... merry christmas to you and to your dad. have a blessed day.

this year we are not.it has been a rought few weeks here so if we do not get cards we will not be sending any out.