I always did like chocolate and still do!  My mom and dad used to fill up baskets like this with marshmallow peeps or bunnies, chocolate rabbits, colored eggs and my favorite--marshmallow eggs.  I still like the marshmallow eggs best.  My aunt Della used to work for Tower chocolates so those marshmallow eggs were my favorite.  The above picture shows me with a big smile because I just found my Easter basket that was behind a chair.  My parents used to hide it so I had the fun of looking for it.

Do you hide your kids' Easter baskets?  What is your favorite Easter candy?
Posted by Karen and Gerard at 6:28 PM 0 comments

A House of Clutter

After my mom died December of 1999, dad just piled stuff everywhere.  While my husband and I were visiting him, I was helping him with his Christmas cards and my husband got bored so decided to take a video tour of his rooms.
He had two filing cabinets in his dining room (can't really see them in this shot though) and a whole lot of empty boxes on the floor between his table and the window seat from things he bought.

Dad quite using his stove to cook but kept it as a storage area.  He used a microwave for his meals. 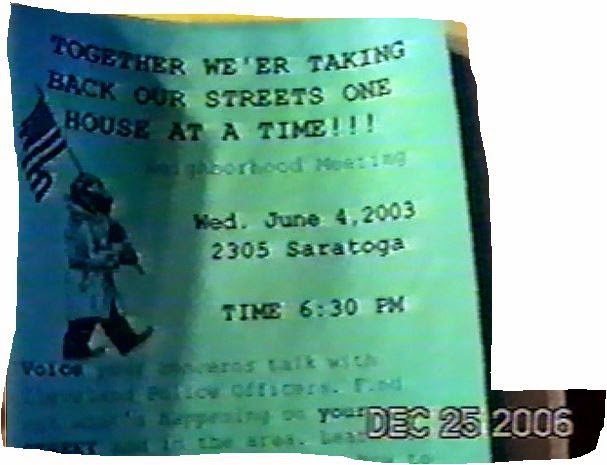 There was a poster on the cupboard door dated June 4, 2003 that he kept up.  I'm pretty sure he didn't even attend that meeting but wouldn't let me throw anything away of his.


I wonder why he bought this cereal in July if he wasn't going to eat it.  It was December and he didn't even open it yet. 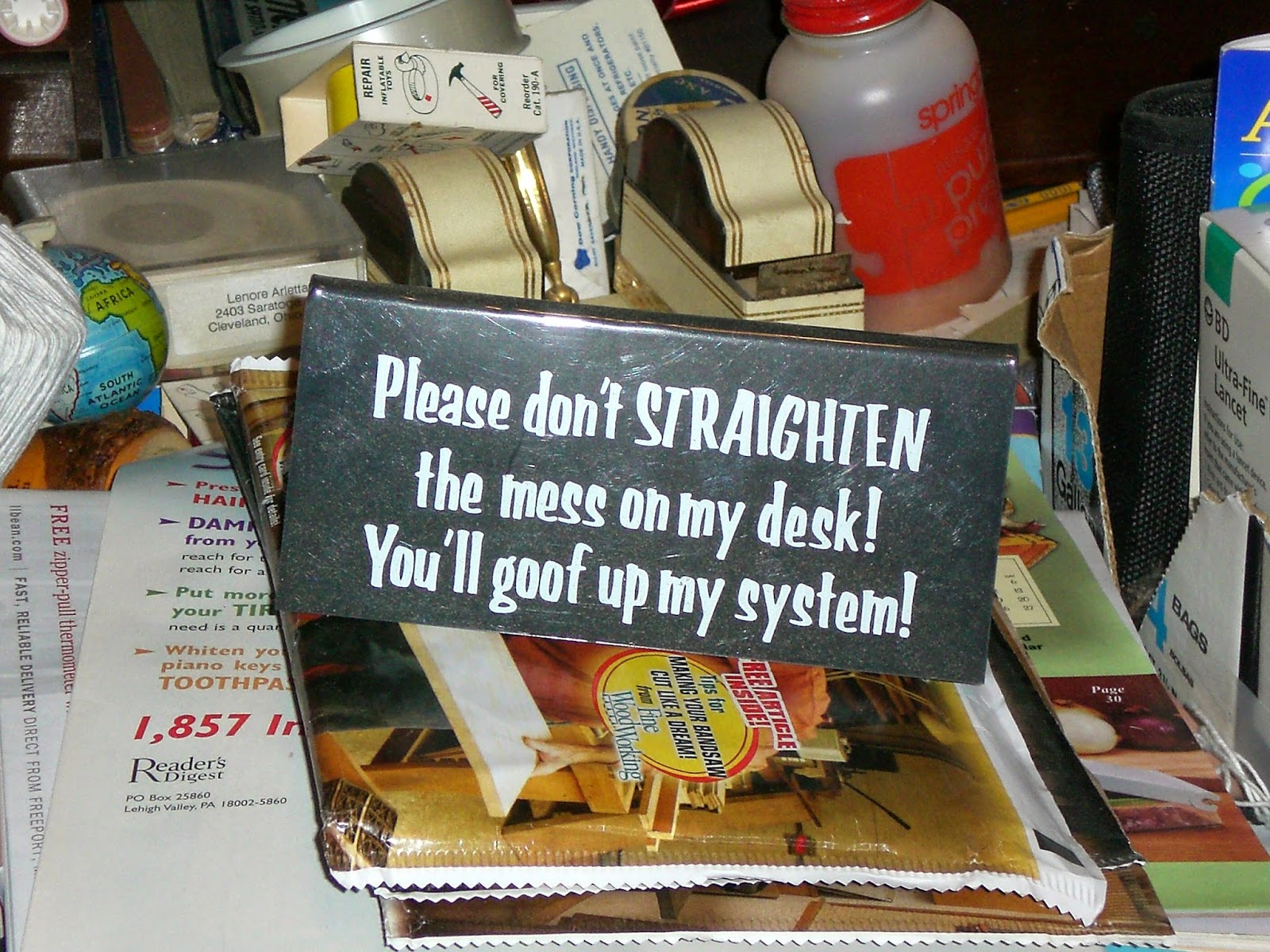 Here we have more clutter, and clutter, and clutter.  All his desks and tables were covered with stuff (junk mostly).  At least he kept a pathway clear to walk.  I bought him this little sign I thought was perfect for him.  He laughed and added it to his desk admitting it was how he felt. 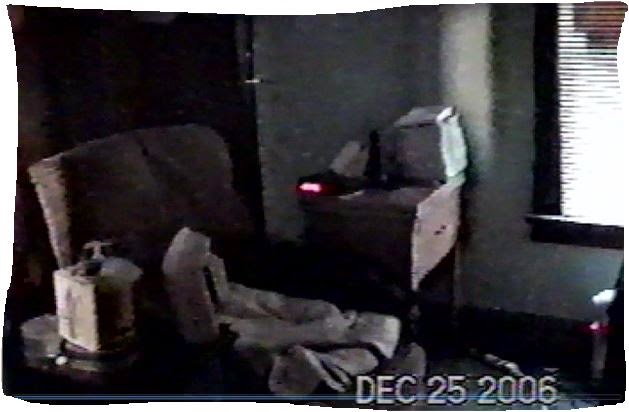 And here we have the master bedroom with no bed!  Dad said it was hard for him to get in and out of bed and his recliner chair was easier and more comfortable for him to sleep in.  He was just a very practical man and was always coming up with ways to make his life easier, even if it was strange.  Here is the video that my husband made with his funny comments:


I hope I don't ever get this bad at letting stuff out to be handy.  I can see how it could happen though when you don't have a lot of space.    Did you ever see anything like this?
Posted by Karen and Gerard at 7:36 PM 2 comments


I got a call from the paramedics telling me dad fell at Giant Eagle as he was taking his groceries to his car, hit his head but is refusing to go to the hospital.  I told them to go ahead and take him and I would meet them there.  His cart started to tip as he was pushing it down the little ramp from the sidewalk to the parking lot, then he fell when he was trying to straighten it.  He just banged up his head but they said he didn't have a concussion.  Nonetheless, it involved getting his head bandaged just above his left eye and I soon found myself in the role of nurse, changing his bandage every day.  This is one of our conversations at breakfast one morning during that time:


Dad:  One day, I don't remember what day it was, but I tried to pour myself a glass of milk.  The most simple thing I could do,  simple, simple.  Nothing to it, just pour a little milk in the glass.  I was pouring.  I always use a paper cup.  I start pouring the milk, instead of going in the glass--it went all over the counter!

Dad:  With this eye (pointed to his left eye) not seeing so good, I can't tell distance.   I can't tell this way, but can see THIS way (points other direction), I didn't even have it over the cup, and I had the milk all over the counter.

Dad:  That took me about ten times normal to clean that up.  Ha, ha, ha.  But now I watch better.

I was at a loss for words, I felt so bad for him.  I love how he could laugh at himself and keep such a good attitude when he had so many frustrations.  His wound got better and he also improved at managing with the bandage blocking some of his eye.

Here is the link to the video.

Posted by Karen and Gerard at 6:00 AM 2 comments

Links to this post
Labels: living, stories by dad

Cardboard Cat Condo--Fun To Make, Fun for Your Cats! 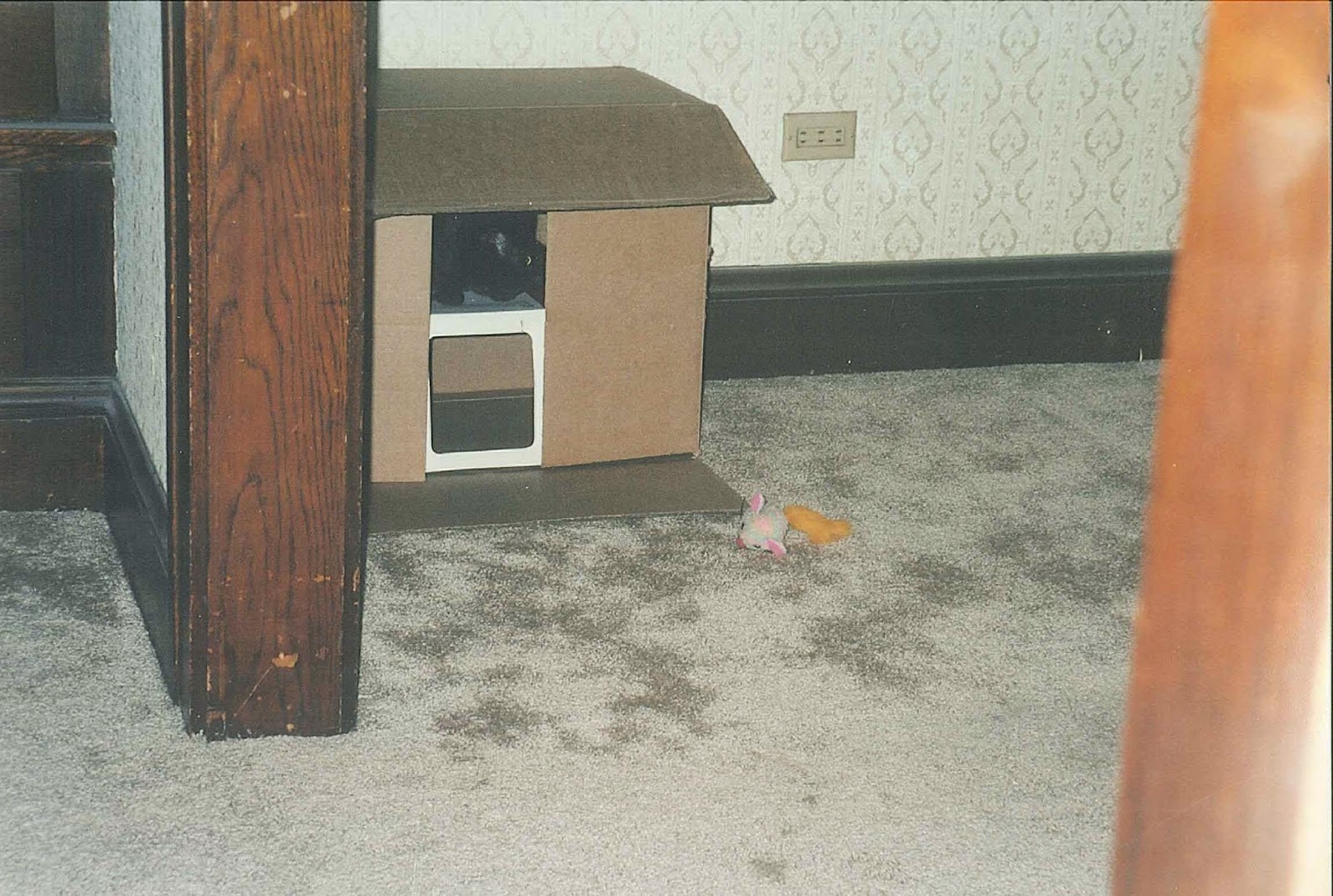 This is a picture of the cat condo my dad, Harry, made out of cardboard.  He loved building things and was very adept at working with cardboard since he worked at St. Regis for years as a box designer.  Softie, another all black cat, is inside on the second floor.  Sorry you can't see it too well in this picture. 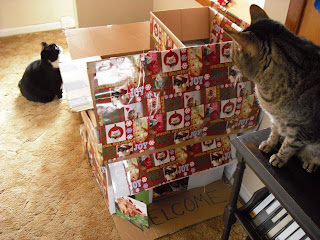 If you have cats, you know they love boxes, right?  I had fun making one for my two cats, Spunky Doodle and Manny Boy using boxes from Christmas in 2012.  I even put a musical Christmas card down in the bottom left corner by the "welcome" sign that played when the cats popped the card open.  This stayed in our upstairs hallway for some time (I think my husband thought I was nuts, but put up with it.)  Can I help it if I take after my dad?  You might enjoy reading Spunky Doodle's post:  "We Got Boxes" that also includes my video demonstrating how to make a cat condo with Spunky Doodle in action.  You really should take a look!

Go ahead, make one for your cats!  Have some fun!

Posted by Karen and Gerard at 6:37 AM 0 comments 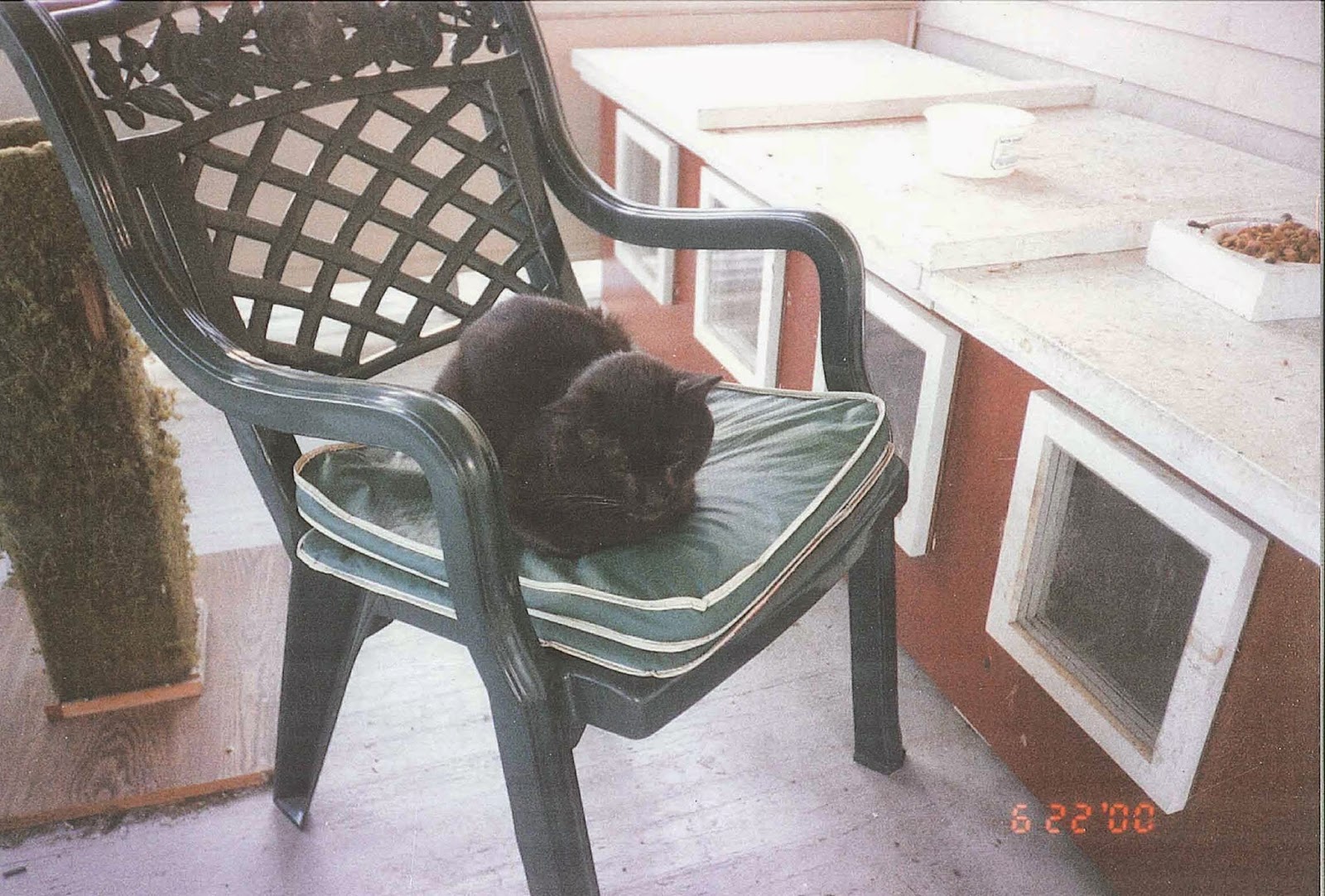 My dad's porch was small.  What you see in the picture shows just about the full length except for the space by the steps in front of the two front doors--one for upstairs where his cats Softie, Sweet Thing and Sylvester resided and one for downstairs.  At first he put up the heated "Kitty Motel" that had a swinging door at the end that the cats could push to go in and out.  Most liked the top where the food buffet was.

The home-made scratching post was added later.  He asked me to look for a comfortable light-weight chair so he could sit on the porch with his cats during the summer.  The green plastic chair in this picture is the one I found for him.  As you can see, the cats liked it too!  I think this is his favorite cat, Blackie, using it.  Blackie was the first cat that came around and followed my dad everywhere.

My dad, Harry, was a kind soul and he enjoyed the neighborhood cats.  He did everything he could short of putting out catnip to entice them to his porch and make them comfortable.

What do you have on your porch?  Ever see one like this?

Best post of the week--link up at Serenity Now.
Posted by Karen and Gerard at 7:12 AM 0 comments 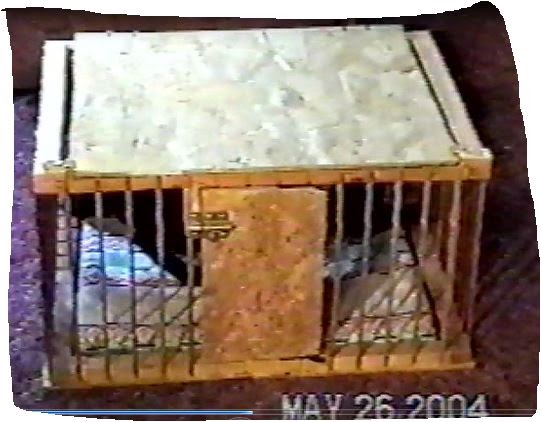 Do you know what this is?  It's a homemade cat carrier the my dad made to take his sick cat, Timi, to the vet.  I think it looks like a jail but my dad wanted his cat to be able to see his surroundings.  The top was on hinges and could be lifted up to drop the cat inside and the door could open to let the cat out.  Timi was not feeling well, he just laid in one spot all day for a couple days in a row and wouldn't eat.

Dad was not a believer in regular vet care so the trip to the vet was very, very scary for poor Timi.  When I went to get the carrier out of the back seat, I set it on the ground to close the door and when I turned to pick it up, Timi was gone!  He had busted some of the dowels out and ran, leaped up over a 5-foot fence and we never saw him again.  I ran to follow him but he was really fast!  We walked up and down the street looking for him and asking people if they'd seen him but we couldn't find him anywhere.

Maybe Timi wasn't as sick as we thought after all or else he really was and wanted to go out on his own terms, being free and saving my dad some money.  We didn't ever use that cat carrier again!

What kind of cat carriers do you use?  Did you ever lose a cat?

Thanks to The Snipping Tool, I Have More Coming Here! 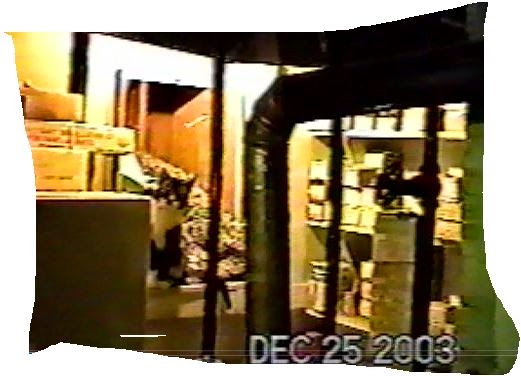 After not posting on this blog since 2013 because I ran out of things to write, I finally discovered a way of capturing photos from the DVD I had made from some video that I had taken with my camcorder.  If you can excuse the quality of the pics, I am sure you will enjoy these new upcoming posts.

I found I can view the DVD clips on the computer, pause it when I get to a spot that I'd like a picture of and then minimize the screen and use the snipping tool to capture it and save it to my picture folder.  I am so glad I can do this to include some more memories on this blog before I use blog 2 print (or something similar) to make this into a book.

This is a sample of one I just captured from video.  This is in my dad's basement on Christmas day of 2003.  One of his indoor cats, Striper, preferred living in the basement.  This is a picture of him peeking at us from the laundry chute.  I brought him his Christmas present, a plastic ring with a ping pong ball in a groove around the edge with cardboard in the middle for scratching.  Striper loved it and my dad and I really had fun watching this cat play with it.

My dad had everything he needed but always seemed to like it when I'd buy things for his cats.

Where is the most unusual place your cat likes to spend time in?
Posted by Karen and Gerard at 7:47 PM 2 comments