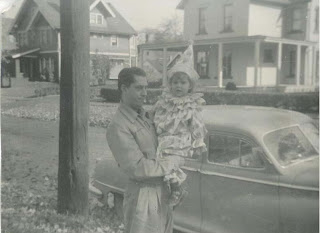 I think parents of young children really look forward to Halloween with their kids. They love dressing up the little ones in costumes and visiting the grandparents to show them. I remember lots of fun times at Halloween and do not feel guilty at all participating in the fun. Here is a picture of me in my clown costume with my dad, one of my early Halloweens going to visit Grandma Arlettaz.
I remember my parents having a Halloween party one year with a cardboard skeleton hung that we could make jump by pulling the string. I thought it was fantastic! As kids we always liked trick-or-treating and trading our candy when we got back. Mine usually lasted until almost Easter. I was good at self-discipline and saving some for later. I do believe mine outlasted the others.

Now as an adult, I like passing out the candy and seeing all the cute costumes the children wear. We do not get many on our street so this year I decided to fill little baggies with more goodies than just one piece of candy. Our pets enjoy seeing the kids in their costumes come to our house too. Last year Abby was outside helping Gerard welcome them and our cats watched from our dining room window.

I know some Christians believe it’s not good to participate and that’s up to them. I would never try to change someone’s conviction about that; however, I have not yet been convicted by the Holy Spirit that I should refrain so until I am, I will continue to enjoy the celebration. This is one time where the neighbors come out and we as Christians can make the most of this opportunity by giving out good candy and perhaps a kids salvation tract with it. I plan on doing that this for the first time this year.

OOPS, CORRECTION: I originally posted this was my FIRST Halloween costume, but when I opened up an account on iMemories and viewed my old movies, I discovered this wasn't my first after all. Take a guess what you think it was and then go to 5 Things I Learned This Week to see if you are right. (It's worth the click to see the cute video--notice all the black hair my dad used to have!  I loved his hair!).

How about you? How are you going to have fun this Halloween? What was your first Halloween costume? Have a happy and safe Halloween!

To find out more about my book and why I wrote it, read the Foreword here.

Playing Dress Up and Learning To Skate-An Old Time Movie

Growing up our dad always liked taking movies of us.  Back in 1961 it was much harder to do than it is today.  We didn't have video cameras then and no digital.  It was on film and for indoors, big flood lights were needed to make it bright enough.  There was no sound back then either, but he did have a title set that he used.  I remember him spending hours splicing film together to make larger reels.

This is a short clip of us kids playing dress-up.  I thought it was pretty funny and my readers may enjoy seeing it.  I had this movie transferred to a DVD at CVS and it allows you to save and edit clips to the computer.  My dad told us to put some action into it so I am the one who pulled out the Kleenex and pretended to blow my nose at the beginning.  My brother was always self conscious about his ears.  As you can see, they are pretty big.  This clip of us playing dress up reminds me of "The Golden Girls."

After the dress up is a short clip of Pam and I learning to skate in our driveway. We have big clunky coats on which was good because we fell often. I never did get to like skating. It just seemed like a lot of work to me and I was always afraid of falling. Pam's fall at the end got cut off on this video clip. I'm still trying to get the hang of editing these things.

Do you take video of your children at play? Sorry for the quality but hope you can see it well enough to enjoy it.

Posted by Karen and Gerard at 3:45 PM 8 comments

What Makes You Mad, And What Are You Going To Do About It? (Writer’s Workshop)

The short answer is spam on my blog by Anonymous makes me mad.  I’m going to change the comments to not allow anonymous ones anymore.  That’s what I’m going to do about it besides confronting Anonymous here.
The long answer is:

Anonymous is my top commenter.

I don’t know why but someone must hate me.  EVERY SINGLE DAY I get spam comments from Anonymous on this blog.  Actually, I don’t think they are all from the same person because they vary.  Yes, I admit it.  This makes me mad.  Even though my comments are moderated, Anonymous still spams me every day on old posts that don’t even remotely relate to the comment.  It’s not as though they actually get on the blog.
I don’t know if this person likes wasting their time doing this or has devised some way to have it done automatically.  I do not like taking the time to have to mark it as spam and delete them every day.  My time is very precious to me and I like to be productive and use it effectively.  Some comments aren’t even in English so I have no idea what they even say.
Read more »
Posted by Karen, author of "My Funny Dad, Harry" at 4:45 AM 14 comments

Dad and I Differ On This--Do Vets Really Care Or Do They Just Want Our Money?

I have a cat, Manny, who dose not like being picked up, is afraid of going into a carrier, and of course, hates going to the vet. We do take our cats once a year for their annual checkups which my dad never did with his cats. I believe it's a good idea to do but dad didn't for the following reasons:

(1) He felt unless they were sick, it wasn't necessary.
(2) He was afraid they would outlive them anyway and didn't know what would happen to them when he died.
(3) Vet care is not cheap and he was a bit worried about running out of money.

When I was told Manny's teeth should be cleaned and they would put him out to do it, I knew if dad was still alive he would advise me against it. I believe the vets care about our pets and are not just out to get our money. I went along with this and scheduled Manny to have it done. I was doing well getting him to the vet twice in three weeks! But then they called and said his back molars are rotting and should come out. I said, okay, do whatever is best for Manny hoping dad was wrong about vets. We brought him home later that day, had to give him soft food for two weeks and pain medicine for one week which I was very pleased that I could do it! Cost = $500!

We couldn't get Manny back a third time for them to check to make sure everything was okay, but he seems normal and is even more affectionate than ever so we blew off the follow-up visit. Manny absolutely refused to go back. We tried to get him into the carrier for four hours unsuccessfully.

What do you think? Is it worth putting the cats through all this vet care or was my dad right?

Posted by Karen and Gerard at 7:02 PM 6 comments