But Dad, I Don't Want To Ruin My Doors

Recently our dog discovered the cats' litter boxes and has helped herself to the poop. Twice now she has vomited poop, once when I was home and once while I was out. It smells awful and what a mess! I heard dogs are attracted to cat poop so I was so happy that Abby wasn't . . . until recently.

I know if dad were still alive, he would have a simple solution. He would offer to just cut a small hole that our cats could go through in our two doors to our upstairs rooms that have the litter boxes our cats use most often. This would be a simple solution all right, but somehow if we ever wanted to sell the house, I doubt if people would like holes in their bedroom doors.

I know this would be a viable solution for dad because he cut out the whole bottom half of two of his doors so he could see where the cats were before he opened it. He put pieces of Plexiglas in them and when I was getting ready to sell the house, the realtor gave me a whole long list of things I should fix in order to sell it quickly and those doors were on it. Fortunately, my dad saved everything and I found the panels to the doors close by.

In my case though, I'd really rather not cut up the door. Other than creating a way of access for the cats that the dog can't get through, such as installing a baby gate at the bottom of the stairs, the second most popular suggestion is to put some Cayenne pepper on some poop for the dog to find and it will probably cure her of the habit real quick. This sounds mean to me and she'd probably vomit it up.

My idea is to just train her to leave it alone and stay downstairs, but the dog trainer said she'd be really impressed if I could pull that one off because it's instinctive behavior--it's part of being a dog. She said it would be very hard to do that and the vet agreed. Abby will stay at the bottom of the stairs if we tell her to. I can be upstairs for 30 minutes and come back down and she'll still be there. Now if I could just think of a way to teach her to stay down when we're not home, that would be great!

In case that doesn't work, I have seen automatic self-cleaning litter boxes at PetSmart for over $100 that I though we could try. Does anyone have any experience with these? On second thought, maybe I could use dad's solution on the closet door . . . hmmm. Have to give that some thought.

Anyone else have this problem? Sandee at Comedy Plus told me about an article "How to Stop Dogs from Eating Cat Poop" on in the comments on my other blog where I mentioned I just learned about this happening this week. Thanks, Sandy!

Here's the link to the cats' post about it: Litterbox Fences Solve Poop Problem

Playing With Cats Is Great Fun!

I used to love visiting my dad and his cats. I had to be very careful though when playing with his cats because none of them were declawed. Occasionally, I would got scratched because they were so quick and sometimes their mood would change unexpectedly. I did try to be careful though. My dad's first and favorite cat, Blackie, used to like riding around on his wheelchair. I would push the chair with the cat sitting or laying on it as best I could along the path between the junk in the dining room and into the living room and kitchen.

My cat, Spunky Doodle, was a kitten born to a stray at my dad's that I took in. Spunky is not 5 years old and I am so glad I have her. She is still a lot of fun. Just last week I discovered another game she likes--spinning on our chair! She climbed up on the back of the chair and I just started spinning it around very slowly and discovered she liked it! I told Gerard, my husband, to take a video so I could post it on my blog to share. (Visit Spunky's blog here.)

Cats are so much fun and so little work. I never really liked cats until I met the cats at my dad's. He fed the stray cats of the neighborhood and so they congregated at his house. I loved petting them when i visited. A few he brought inside. What games do your cats like or how do you keep them entertained?

The Best Shirts Ever! 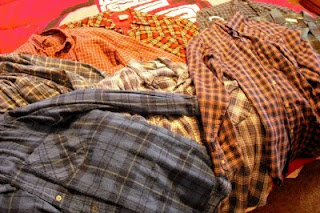 My dad loved flannel shirts with two front pockets and I don't think he threw any out. When I went through his closets after he died, he had three closets full of flannel shirts and some flannel lined shirts from L.L. Bean. He would wear these all yaar round, even on hot summer days! If he got paint on some, he'd still save those to wear the next time he painted.

My dad had so many shirts because he'd usually get flannel shirts for his birthday and Christmas. I found one still in the original plastic so used it to lay him out in for his funeral. He was never big on suits and I just thought he'd look more like himself in a flannel shirt. Here we found a picture of when he got that shirt which was about 20 years earlier! Who knows, maybe he meant to save that one for his funeral one day--sounds like something he'd do!

I gave most of them away but kept a few for my husband and me. It's really nice to have these because it makes me feel close to dad still when I wear one of his shirts. My husband discovered how nice they are too. He never used to wear flannel shirts but likes them a lot now, especially in the winter to wear to work. They are so comfortable! 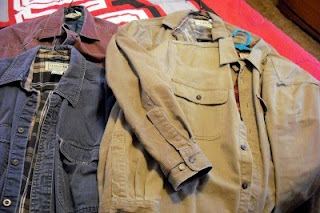 The L.L. Bean shirts are very nice too. They are more like a light weight jacket with flannel lining. They are great for yard work or for wearing on cooler days without having a bulky jacket. I kept five of these for us and am very glad I did!

Infarrantly Creative Would Have Been One of Harry's Favorite Blogs

When discovering Infarrantly Creatative through SITS last week, it made me think of my dad. This blogger has a lot of imagination and talent for recycling things by making them into something else more useful, just like my dad used to do.

When reading Ballard Designs: Acanthus Cut-Out Plaque it said how she looks in the catalog and then makes the item for much less. This reminded me of my dad because he used to the the same thing. One thing I remember he made was a wood stand with handles that fit around the toilet to make it easier for my mom to get on and off. She was able to push down on the handles to help herself up. He found a picture of it in a catalog and just copied it.

I thought it funny that Infarrantly Creative is active in "Roadkill Rescue." You say you never heard of that? It' when you go out on garbage day or to a yard sale and get a piece of junk very cheap, sometimes for free, and then fix it up to make it usable. My dad had a basement full of junk that someday he was going to fix but just never had the time to get to it all. Check out the makeover Infarrantly Creative did on Lamp Refabulous.

When I read how Infarrantly Creative turned a hutch into a puppet theater, it brought back good memories of the cardboard puppet theater we got for Christmas on year. Funny how different things will set off memories of my dad. I never know what's going to come up next, but it seems something always does.

Infarrantly Creative also gives instructions so you can do the projects too if you wish. It's a great crafty blog that you should be sure to visit if you like doing projects that save you money.