“My Cat From Hell” Is Entertaining And Educational!

Thanks to The Best of 2011 blog hop over at "A Pause on the Path," I discovered that this is my most viewed post for the year!

So far the three times I’ve watched, once the people change some things, the cats come around.  They showed some of the following extreme cases: a black and white feral cat coming into the home that already had two other cats, a white cat who bit and scratched the person while he slept, and a Sphinx hairless cat who got into everything including chewing wires and knocking things over.

It was funny when the cat behaviorist was trying to get the feral cat out of its hiding place in the wood shop and into the carrier.  I was actually rooting for the cat.  Sure enough, even the “expert” couldn’t get that cat into the carrier.  It took off really fast!  It made me feel better about not being able to get my cat in.

My dad would have enjoyed this show very much because it’s all about making cats happy.  He loved his stray cats but the ones he brought inside I don’t think were very happy, at least not the ones who lived upstairs of his double house rent free.  By watching this show, I learned a few things that I didn’t know before:


(2)  A cat that is hiding or attacking does so because they are afraid, stressed out and not happy.

(3)  Cats do not like to be confined in small rooms with little to do or things to climb on.  If you can provide high places for them all around the room, they will be much happier.


I believe these are some of the things dad would have done for his cats if he had seen this show:

1.  Get them some cat trees!  This gives the cat a place of their own from which to observe from up high.  I don’t know why I never thought of buying them one of these.  I have one for my cats and they love it!  They usually go on that instead of the furniture.

2.  Use interactive toys.  Cats like playing with their owners.  Just putting cat toys out for the is not very exciting for them; however, when those toys move they become very interested and pounce, chase and jump.  (I played with dad’s cats when I would visit but I don’t think he ever did.) 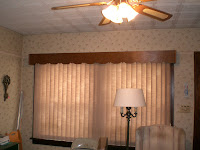 3.  Provide high places.  He probably would have built some shelves for them to jump on so they could get up on top of the valance or other higher places.  He may have even built a special shelf for them to go on around the room up near the ceiling.  Looking back, he had their cat beds always on the floor for Softie and Sweet Thing.  They probably would have liked them on the window seat better.

Have you seen this show?  What do you think of it?  If you like cats or have a problem with your cat, you really should watch it sometime!

I am donating 50 cents per comment during May to Cystic Fibrosis Foundation. To find out more about my book and why I wrote it, read the Foreword here Available as e-book (http://outskirtspress.com/myfunnydadharry/).

Check out more Saturday Sampling posts or link up one of yours--best posts of the week over at Half-Past Kissin' Time..
Posted by Karen and Gerard at 8:19 PM 14 comments